Most cameras support some basic operations over PTP, but often only in a limited fashion. For example, downloading of files can be limited to just JPEG files.

If you want simple control over the camera without USB a protocol connection (for example, using a micro-controller or RC equipment) see USB Remote. Note the USB remote option must be disabled to use the PTP Extension.

An overview of the functionality available through the PTP interface is described below. The specific functionality and usage depends on which client application you use. The canonical reference to the CHDK PTP protocol is core/ptp.h in the CHDK source tree.

Files can be uploaded to and downloaded from any part of the file system.

The PTP interface allows execution of lua scripts sent over PTP. In general, any scripting function available to normal CHDK scripts can be executed remotely. See CHDK Scripting Cross Reference Page for a list of CHDK script functions. There are some additional functions specific to PTP, described in Lua/PTP Scripting.

Some of the features available using Lua scripts include

CHDK 1.1 added support streaming the contents of the camera LCD display over PTP. (revision 1921 and later)

CHDK 1.2 added support for saving images directly over USB, without saving on the SD card. This is supported for raw and DNG on all cameras, and for jpeg on some cameras. For raw and DNGs capturing a subset of rows from the raw framebuffer is also supported. CHDK 1.5 added support for Canon raw on cameras with native raw support.

All the client applications below require libusb-win32 driver on Windows. Note, it is strongly recommended that you use the Zadig installer described below, rather than using the libUSB package directly.

Zadig is recommended, especially on Windows 8 and later which restrict the use of unsigned drivers. To install libusb using this tool:

To remove the driver installed by Zadig or the INF wizard

If you are using an OS prior to Windows 8.1 and don't want to use Zadig, you can install libusb manually instead.

As described above, a client program compatible that implements the CHDK protocol is required to access these features. 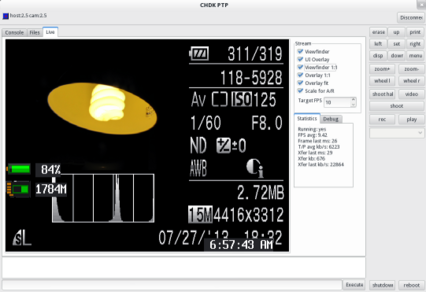 chdkptp is a client created specifically for controlling CHDK cameras. As of 2021, it's the recommended client for most use cases. It provides CLI and optional GUIs based on IUP and LGI.

chdkptp also provides a Lua API for the CHDK protocol on the PC. Because the GUI and CLI are also implemented in Lua, this makes chdkptp easy to extend and enables end users to implement complex interactions with code on the camera.

Source and builds are available on the chdkptp assembla project. A thread in the chdk forum is available for support and discussion.

chdkptp is currently labeled alpha because functionality and APIs are subject to change. However, the snapshot builds are generally stable and suitable for everyday use.

The chdkptp code is based on the CHDK fork of ptpcam, but it does not use the same commands or command line options.

chdkptp is developed for MS Windows, Linux on x86/x64 and raspberry pi.

Several users have reported successfully building and running chdkptp under MacOS. See README-OSX.TXT in the source for more information. chdkptp is not developed for or tested by the developer on MacOS, so this may be out of date. Patches, comments and corrections welcome. As of 2021, the LGI GUI can be used on MacOS.

Work is also on its way to get as least the CHDKPTP CLI running on an ODroid XU board and a BeagleBone Black. Help to make that a reality is appreciated, more information here :

On windows 10, you should install the libUSB driver with Zadig, as described above. You may need to re-install after major windows updates. On older windows versions, if you haven't installed with Zadig, you might need to disable the "Canon Camera Access Library" service (or, if that doesn't work, the "WIA" service) to get CHDK clients to work properly.

chdkptp on Linux is normally invoked using a shell script called chdkptp.sh or chdkptp_gui.sh. Where documentation and examples on this page refer to chdkptp, substitute the appropriate shell script name.

Make sure you've got access to USB; in some cases this means switching to root (or changing permissions). See the section titled "Permissions issues" in https://app.assembla.com/spaces/chdkptp/wiki/Install or https://chdk.setepontos.com/index.php?topic=6231.msg89252#msg89252 for additional details.

If your distro's default configuration accesses the camera on connect, this may put the camera in a state where some functionality (such as switching to shooting mode) is not available, or prevent CHDK clients from accessing the camera. The camera screen generally goes black when this happens. See title "Interactions with default software" in https://www.assembla.com/spaces/chdkptp/wiki/Install for additional information. This is typically caused by the gphoto2 auto mounter, which is included by default on many distros (Ubuntu and Raspberry Pi OS, for example) when a graphical desktop environment is installed. You can update the udev rules as described, or for a quick and dirty one-off, killing the offending task at the Linux command line (or in a shell script) with killall /usr/lib/gvfs/gvfs-gphoto2-volume-monitor may also work. On many cameras, it is also possible to exit the black screen state using the commands described in the FAQ section below.

The file USAGE.TXT included in the chdkptp distribution contains an overview, command descriptions, and some examples. The help command can be used to get usage details for chdkptp commands. Some additional documentation is available from the chdkptp assembla pages

When using chdkptp, it's important to be aware of the difference between chdkptp CLI commands, CHDK script functions, and chdkptp Lua script.

The luar and lua CLI commands are used in chdkptp to run camera side script directly. Because they are frequently use, these are available as the one-character shorthand commands = and . respectively.

Except for the lua, luar and exec commands, any option or filename provide to a chdkptp command must be quoted if it contains spaces. For example, to to use remoteshoot and specify the file be saved to a directory with a space in the name, you must use

Using chdkptp from the command prompt

A common use case for chdkptp is to execute several commands from the command prompt or a batch file or shell script, using the -e command line option. For example, to connect, put the camera in shooting mode, shoot a picture, and then download pictures, one could use

If the chkdptp command used with -e has options or otherwise includes spaces, the entire command with all options should be a single -e option, quoted as necessary for your OSes shell / command interpreter to treat it as a single word, like

This is separate from the quoting required chdkptp itself described above. If required, chdkptp quoting must be protected from interpretation by the shell, like

The specific quoting rules for the command line invocation depend on your operating system and shell. Many chdkptp command options which can include the $ character, which must also be protected from shells commonly used on Linux and Mac. The ! character is also significant to some shells, using exec instead is recommended for command line usage.

chdkptp accepts forward slash ('/') as a directory separator on all platforms, and also uses it for camera paths. On windows, this is recommended over using backslash ('\') which may be interpreted as an escape character in some case.

As described above, paths with that include spaces generally need to be quoted.

Paths on the camera have camera dependent limits. In general, it's safest to use 8.3 names, avoid deeply nested directories, and avoid characters other than simple alphanumerics.

Note that the CHDK script function set_lcd_display generally does not turn off the sensor.

When shooting, the live view often shows random garbage. This is normal, caused by the camera using the frame buffer for other purposes while shooting.

On many cameras, if the camera is started with video selected in playback mode, it does not appear on the live view.

1) download and install libusb (see install instructions above)
2) go here (German CHDK forum topic on the development of ptpcam with CHDK extensions)
3) download ptpcam_Vx.x.zip at the end of the first message.

If you are comfortable writing batch scripts (or perl/python/... scripts) for your PC, ptpcam can be used to download jpg files and upload lua scripts and execute CHDK lua scripts on your camera all while your camera is carefully lined up on your subject and mounted to a tripod (when, for most Canon cameras, removing the memory card is not possible).

Keep in mind the fact that commands sent to your camera via ptpcam will take more time to complete than it takes for ptpcam to return control to your script. So make sure that after you issue a ptpcam --chdk="blah blah" command, that you have inserted a delay in your (batch file, perl, ...) script running on your PC to give the camera time to finish its business before you go poking the camera again.

A version of ptpcam is maintained in the chdkde source tree, with builds available from the chdkde forum (download ptpcam_Vx.x.zip). The ptpcam executable may be built for Windows or Linux.

ptpCamGui is a graphical front end for ptpcam. Builds are available from the chdkde forum It's also part of CHDK Shell.

A forum thread including descriptions can be found here.

The source code for the frontend and the DLL is available on the ptpCamGui assembla project.

ptpCamGui is only available for Windows.

English translation of instructions for using can be found here. Note that despite coming from a German site, both English and German languages are supported in the same .exe and are set automatically (based on your Windows installation language setting).

First time users note that the big red camera icon is used both to enter camera mode and to shoot (when radio buttons to right select "Photo").

gPhoto has included some support for CHDK extensions since version 2.4.11.

Make sure USB Remote is disabled.

There are two known workarounds:

This is usually the issue described in the Linux section, caused by default Linux software accessing the camera on connect. It can also happen on windows if you don't use Zadig or the INF driver.
On many cameras, a LogicalEvent can be used exit this state. For DryOS, use post_levent_to_ui(4482). For VxWorks, use post_levent_to_ui(4418). This event also unlocks the keyboard. On some cameras, a subsequent switch to rec will fail with the lens extending but the camera returning to play mode. In this case, a shutter half press may fully switch to rec
As of CHDK 1.6 build 5815, switch_mode_usb attempts to send this event automatically when required.

Perhaps you didn't correctly specify the file on the camera. Always use the full path and start with a capitalised 'A'. For example: "download A/DCIM/100CANON/IMG_1234.jpg test.jpg"
note this mainly applies to ptpcam, chdkptp corrects the names for you.

The original PTP Extension was contributed by mweerden. At mweerden's github one can find the original sources as well as a follow-up attempt at a minimal version for inclusion in the SVN trunk. The proposal version, with some minor modifications, has been included in CHDK trunk since changeset 957 and has been enabled for all cameras since changeset 1116

ewavr made additional contributions, including the first "live view" functionality and GUI client. You can find files related to this work on ewavr's site.

The full history can be found in the PTP development thread on the forum.