In order to port CHDK, you need a copy (dump) of the original firmware from the model you are trying to port. This page explains various methods of obtaining a dump.

For most cameras the Canon Basic Dumper script is easiest and should be all you really need. The other methods mostly of historical interest.

Once you have a dump, see Adding support for a new camera.

See Canon Basic/Scripts/Dumper. This is the recommended method, which has been used for most cameras since it was discovered in 2010.

NOTE: This method will not work on recent (since 2009 or so) camera without modifications.

CardTricks is a graphical utility which includes udumper and a gui to prepare the card.

The method is to make/adapt the WIF loader. The base for developing it is an original firmware updater to similar camera models. As this loader has the functions to work with files, this way allow to save a dump of original firmware to SD-card. The main problem of using this method is that you have to pass all initialization stages of original firmware in order to be able to write to flash card. Used with: A620, A630, A640, A710, S2IS, S3IS.

NOTE: The method described here is a lot of work and no longer necessary - use the Canon Basic Dumper. It has been left here for historical interest and out of respect for the effort of those who created it in the first place.

This method is based on the 'blinking' of the original firmware through a led of the camera. You have to make a receiver (photodiode or phototransistor), the software to write a dump, decoder and a tiny firmware which outputs camera's firmware through the led. The receiver can be connected to serial port (you need to emulate the UART in the camera in this case) or a microphone input.

Note: Many people have had trouble trying to obtain a photo-diode or photo-transistor for this task. Do you have an old ball-driven mouse in a junk-box? Each X and Y axis is read by the rotation of a notched wheel passing through the light-path between IR LED (transmitter) and a photo-diode detector. The optical device you need is easily salvaged from that. Caution: Many of the mouse photodiodes are ONLY sensetive for infrared light. These photodiodes can not be used for firmware dumping, because they can not "see" the LED light from the camera.

I used the microphone input. All necessary files (with sources) you can get here.

The scheme I used:

Each byte is encoded in the following way: 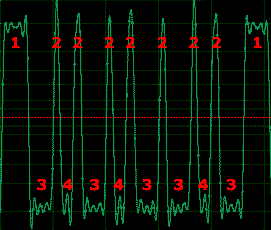 Speed/signal adjusting:
It may be required to do some adjustments depended on camera/led/receiver used. The main idea is to get 'readable' signal as shown on the picture above.
Here the values for certain speeds and leds for A610:

You can download (blink) the firmware using your computer's serial port instead of sound card as input device. You may need a photodiode connected to serial port according to the following schematic: 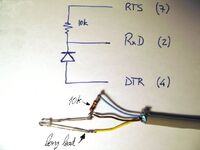 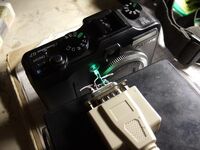 The photodiode used is a generic one. You may need to test the distance to the camera's AF LED which fits you better, mine worked properly at about 20cm (8 inches) away, YMMV. (side info: you can hardly see the LED blinking because it is very fast, but it is still perfectly readable by the photodiode, so do not worry). The resistance in the circuit shown above has got 10 kOhm. Depending on the photodiode the resistance should also have 200 Ohm for best use.

You also need the camera blinker and serial port loader programs. You can find the original version written in Pascal here. An other converted version to Java with CRC16 is available here.

Alternatively to load.exe / Load.class you can use realterm for both monitoring the serial port and capturing the file at the same time. Make sure you configure it like this:

While capturing you can see the file grow and the speed rate in the status line at the bottom. It should be a figure around 800 CPS (characters per second).

load.exe will timeout after 10 seconds at blink's end. For realterm you'll need to manually stop capturing when the AF led comes off. Once done, reload your camera's battery. For G7 you may need to repeat the above procedure using PS2.fir to get the firmware's second part. Open the downloaded firmware files in a HEX Editor and cut off the lead in information (.....xx xx xx begin) and the load out (end.). Now you have two files with all the necessary data in it. To join two files just do 'copy firmware1.fir + firmware2.fir Firmware.bin' and you have single firmware file in your hands.

The wired solution: You can also go hardcore and open the camera and look for the LED connections (you will not need the phototransistor) to get a more reliable connection. If you are brave enough you can find the instructions here.